Her Son Wasn’t Wearing Shoes at the Zoo

Her son wasn’t wearing shoes at the zoo.  That wasn’t the first thing I noticed about her or the little blonde-haired boy with her. And the fact that he didn’t have shoes on definitely isn’t the point of this story. But sometimes little bare feet expose our hearts… 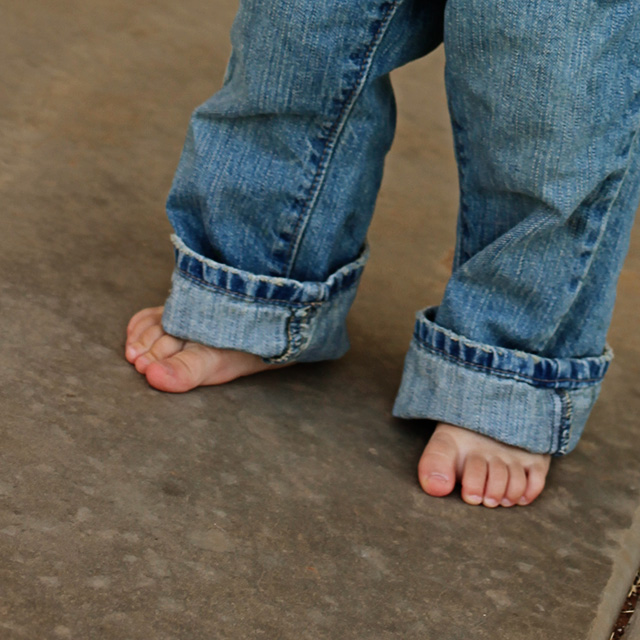 My husband and I took our three young kids to the zoo a few months ago one rainy weekend morning. Normally this would be the perfect time visit the park with the animals active and the temperature comfortable.

But this morning was different. The weather man had called for rain. Storms were approaching, and the ticket taker pointed out the best places to seek shelter if necessary. With a map in hand, we set out on our morning adventure – lots of uphill walking, plenty of complaining about all of the walking, and a few animal sightings. (Why does it seem like the zoo is uphill in every direction?)

The rain had kept most of the other visitors home. There were just a few other families there with us which was nice… and a little odd. But it is probably because there were so few other people there that I noticed her and her family.

She had a baby on her chest and was pushing a giant double stroller with only one kid inside. The other stroller kiddo had escaped with his brother and sister, and they were all orbiting their momma like little planets around their bright star.

I was impressed. She appeared to be handling their adventure well. At least it looked that way on the outside looking in. I remember smiling at her – that, “you’re secretly my hero” smile that moms all have. We don’t pass it out as often as we should… but we all have one.

That’s when I noticed her little one without shoes. His pants, just a little too big, almost hid the fact that his preschool toes were bare as he climbed and explored the park.

I was curious. I wondered what their story might have been that morning. I thought of some of the scenarios that could have led to that moment. Maybe she got all the way to zoo and realized that she had left his shoes at home. Maybe he jumped into a giant puddle in the parking lot and wouldn’t put his soggy shoes back on. Maybe he has a sensory condition and doesn’t like anything on his feet ever. Maybe she takes care of everyone every day all day by herself and she just plain forgot the kid’s shoes. Or maybe he just refused to put them on and she chose not to fight with him.

Many of these things could have been true for us, too. I could have just as easily been the mom who took her kid to the zoo without shoes. But I wondered if that other mom knew I felt that way. I wondered if she was worried what other moms might think of her. She might not have cared, but I know how I have felt in situations where I was sure other moms might judge me. I know there have been moments when I have wanted to offer an explanation to other women who didn’t know me or my kids.

I wondered if she cared (even just a little) about what I might be thinking. Because deep down, no matter how much we say it doesn’t bother us, most of us are pretty sure someone is going to misunderstand us or our hearts. Many of us are just waiting for the ugly look or whispered comment. But on that day, all I had was grace for her. Not just grace because I knew her story (because I definitely didn’t and she didn’t owe me her story either).  I had grace for her because I know how much I need it every day in my own life.

And maybe the real story that day is true for all of us. Maybe we are all just in it together… waiting on the rain that never comes.